I think it's not too ambitious to resolve to transfer the rest of my old swashbuckling reviews to Theoretical Swashbuckling (with addenda), add a few new reviews, and perhaps add a few more installments of How to Create a Swashbuckler. If I could actually play a swashbuckling game in 2021, that would be splendid.
Posted by Gordon Cooper at 9:23 PM No comments:

At a time of reduced socializing, I find myself wishing I had more swashbuckling games that lend themselves to solitaire play. I'm not sure I own any, but this would be a good time to to search for them or, if none of quality can be found, make my own. Hm...
Posted by Gordon Cooper at 11:49 PM No comments: 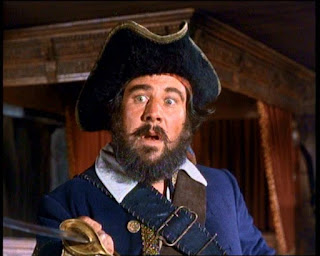 Posted by Gordon Cooper at 10:58 PM No comments:

How to Create a Swashbuckler in Pirates & Plunder 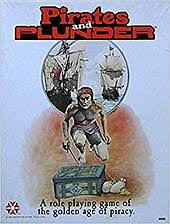 Pirates & Plunder, published by Yaquinto Publications in 1982, is "a role playing game of the golden age of piracy." As it says on the box,

PIRATES & PLUNDER offers you the unique opportunity to be a staunch and loyal pirate for the Queen, a swashbuckling buccaneer seeking personal glory and fame, or a degenerate scoundrel out for a good time. But more than anything, you are in it for the booty — mountainous, glittering heaps of it.

And this is my first character for Pirates & Plunder:


Character creation in Pirates & Plunder is by no means a straightforward affair as the relevant rules are spread haphazardly thoughout two books, Book I: The Basic Game and Book II: The Advanced Game. There is no clear distinction between what other games would designate as attributes or skills, but most abilities are generated by rolling 2d10. Players generally control a Major Character, a Supporting Character, and one or more Extras. Of these, Major Characters add +3 and Supporting Characters add +1 when generating the abilities marked with an asterisk above. Derived abilities (e.g. Stealth, Senses, 'To Hit' abilities, etc.) are usually generated by calculating the average of several other abilities. Everything is generated randomly except the character's name — height, weight, nationality, religion, emotional stability, morality, even the general effect of one's physical appearance. Personality traits for Major Characters can be modified by +5 or -5 before the dice are rolled if the player wishes to tilt them in a particular direction.

Generating a character is made somewhat laborious by the scattering of the rules through two books interspersed with introductory adventures and rules of play, and it isn't helped by the confusing character sheet (although I do appreciate the partial ability generation summary on the reverse).

Although I wanted this game as a lad, I'm sure I would have been as disappointed by it then as I am now. It seems like too much work to run for too little reward.

Posted by Gordon Cooper at 3:48 PM No comments:

Regarding Special Moves in Swashbuckling RPGs

Not every move, maneuver, or attack made by a swashbuckler needs to be an extravagant stunt. Sometimes the smart thing to do is dispatch an enemy efficiently and move on. If a player character is compelled to make every combat action an elaborate orchestration, it becomes wearisome for the player and makes the fight as dull as a conventional battle in which combatants just stand there and take turns exchanging blows. There needs to be a balance of elements to keep it interesting.
Posted by Gordon Cooper at 10:43 PM No comments:

One of these days, I'll do an extensive search for interesting swashbuckling blogs and include them in the blog roll I call "Dispatches." These needn't be gaming-oriented, although swashbuckling games are a particular interest of mine. I confess I am surprised and nonplussed by the scarcity of such.

Posted by Gordon Cooper at 11:12 PM No comments:

One of my interests is puppetry. I make puppets, construct portable stages, write puppet plays, and, when I get the opportunity, perform. It is strange that I've never, until now, given serious thought to creating a swashbuckling puppet play. It's been done before. Puppeteers have been performing Orlando Furioso for centuries. Perhaps it is time I explored the genre in my own puppetry. Ah, the possibilities!

Posted by Gordon Cooper at 11:59 PM No comments:

A swashbuckling game ought to resolve combat in a quick and entertaining fashion. If the players can't feel the flurry of action and fly by the seat of their pants as it were, then what is the point of pretending to swashbuckle? If every combat scene is a dull recitation of modifiers and the flipping of pages to find relevant rules, where is the actual swashbuckling? Is it only in the character monologues? If ever there was a genre in which the combat should flow, then surely this is the one!

Posted by Gordon Cooper at 11:19 PM No comments:

How to Create a Swashbuckler in Skull & Crossbones 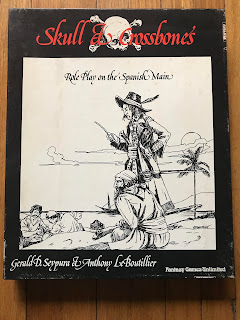 Skull & Crossbones, published by Fantasy Games Unlimited in 1980, is a game of "Role Play on the Spanish Main," which means pirates, privateers, and general swashbuckling from 1680 to 1720. It asks:

Do you remember those old Errol Flynn movies where he was a bold adventurer chasing after a Spanish Galleon, usually captained by the villain. Or, how about the Robert Shaw thriller, 'The Buccaneer'? Wouldn't you like to be able to do that? With this game you can.

This, then, is my first character for Skulls & Crossbones:

Hit Points: 16 (Strength + Constitution (- low Strength penalty))
Skills: Captain - includes the skills of a Navigator (roll of 98 on Skills table)
Money: 17 gold pieces (12 + 1d6)
Weapon: Rapier ("For those characters who have rolled an advanced skill, such as an Apprentice Sail Master, Navigator, or Captain, the choice of a Rapier is automatic and no roll is required on this weapons table [Weapons Chart].")

Character creation seems simple, but certain pertinent rules are scattered throughout the rule book. You roll 4d6 for Strength, Intelligence, Agility, Constitution, Luck, and Leadership. The score for each is divided into four categories of competence, each of which has special rules. In all cases, a score of 9-18 is considered Average. Hit Points are determined by adding a character's Strength and Constitution, but it may be modified by the category in which each of those scores fall. In the case of my character, his Strength of 7 is below average, so his Hit Points are reduced by one point.

It should not be assumed that just because a character has the abilities of one of the more advanced ranks that he also has the experience points and enhanced abilities of that rank. He does not. Each character begins as a sailor and must work his way up the chain of command when first signing on a ship as a pirate or privateer.

Following this, a specialty must be chosen for the character (and it is unclear whether it must match the character's rolled special skill). The choices are Gunnery, Mastery of Sail, and Navigation. This will determine the experience point chart the character uses and the abilities and ranks they gain at certain levels.

Naturally, you can flesh out your character with as much or little detail as you desire, but the character reference sheet relegates this information to "Notes."

At 32 pages, it would not be difficult to familiarize oneself with the rules. The combat rules are inelegant, but not ponderous. Still, they lack the flow of action I prefer in a game that simulates swashbuckling adventure. I would play it to get the feel of it, but probably not longer than one campaign. In many ways, Skull & Crossbones strikes me as more of a simulation board game with optional role-playing than a dedicated role-playing game.

Posted by Gordon Cooper at 7:16 PM No comments:

The first issue of Bob Brinkman's Skull & Crossbones Classics, a role-playing game in zine form compatible with Dungeon Crawl Classics RPG, has arrived, answering my prayers for a piratey DCC RPG. Further writings on the matter will follow... 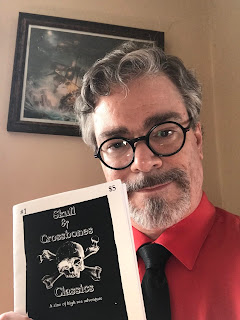 Posted by Gordon Cooper at 4:46 PM No comments: