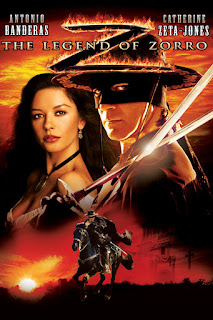 The Legend of Zorro (2005) is another example of the sequel that ought never to have been made. I ought to enjoy writing a review that eviscerates a film so deserving of it, for bad reviews are invariably more enjoyable both to write and to read, but in this case, I am merely tired. I am tired of seeing capable actors lowering themselves to reciting lines as if they were bored [redacted]. I am tired of screenplays that are nothing more than toothpick sculptures built to support a few over-budgeted stunts and script-doctored catch phrases with a bit of family-safe sentimental tinsel draped over it. I am also tired of unconvincing and uninteresting villains, which is a flaw that was present in its predecessor, The Mask of Zorro (1998), but which is even more egregious in this film. Without going into painful, fruitless detail, I will merely state that this is a disappointing and yawn-inducing film that seems better suited for the small screen with commercial interruptions, extended snack breaks, and serving as background noise as one makes unnecessary telephone calls or works on a crossword puzzle. If my attention had been more profitably engaged in such activities, I might not have detested this film quite as much.