The Curse of Capistrano 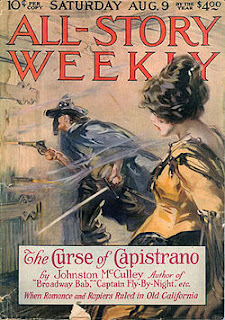 The Curse of Capistrano by Johnston McCulley is the first story of Señor Zorro, originally appearing in the pulp magazine All-Story Weekly in 1919. It was rapidly adapted to film by Douglas Fairbanks in The Mark of Zorro (1920), which provided the alternate title for its source when it was released as a novel. Zorro is arguably North America's first fictional swashbuckling hero, influenced by both the legends of Robin Hood and The Scarlet Pimpernel (a novel penned by Baroness Emma Orczy in 1905 from the play written by her and her husband, Henry George Mantagu MacLean Barstow in 1903). The novels and movies of Zorro would, in turn, beget an entire genre of adventure fiction from The Shadow to The Green Hornet to Superman and, of course, Batman.

Apart from its profound influence on popular culture, The Curse of Capistrano (or The Mark of Zorro if you prefer) is simply a damned fine romantic adventure story with all of the elements necessary for a good swashbuckling tale. It maintains an elegant balance of the legendary and the human, the melodramatic and the comedic, the daring and the whimsical. The pacing is superb, the characters have substance, and there are moments when one can almost feel the swell of music in one's soul. This is a novel that did not disappoint this lifelong fan of Zorro. I recommend it in friendship to those with the heart of Zorro.

Posted by Gordon Cooper at 2:15 PM