How to Create a Swashbuckler in Privateers and Gentlemen 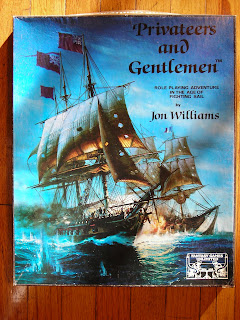 Privateers and Gentlemen, published by Fantasy Games Unlimited in 1982, is a game of "Role Playing Adventure in the Age of Fighting Sail" wherein "The world of Horatio Hornblower and all the naval heroes of fact and fiction is thoroughly dealt with in three volumes of rules."

As it states in the first volume, Promotions and Prizes:

PROMOTIONS AND PRIZES is a historical role-playing game. Each player will take the part of a naval officer of the period 1755-1815, attempting to rise in rank and affluence through a series of naval battles, raids, skirmishes, and captures... meanwhile avoiding any number of horrible deaths, diseases, amputations, courts-martial, or perhaps being shot by a firing squad like Admiral Byng.

Here is my first character for Privateers and Gentlemen:


Character creation in Privateers and Gentlemen is of moderate complexity. The eight attributes are generated by rolling 3D6 for Strength, Sense Acuity, Mass, Constitution, Intelligence, Dexterity, Intuition, and Charisma. If the character's attributes are hopeless, the player may, with the referee's permission, roll again or even roll three characters and choose the best. I opted for the latter and selected the third character. Three tables are consulted to determine one's Strike Bonus, Shoot Bonus, and Parry Bonus based on three or four of a character's attributes.

Skills begin with starting abilities based on a variety of factors. Some will be equal to a character's attribute, some will start with a random roll such as a D10 or D20, some will be calculated by multiplying an attribute by .5 and adding D10 or just averaging two attributes, and others will be static numbers such as 1 or 4. After these are determined, the player may then spend points to improve any skill chosen using a pool of points equal to the character's Intelligence plus the rolled result of the character's Social Level divided by 5. In my case, this was 31 points, and I immediately spent 8 points on Swim (for which I had rolled a starting ability of 2).

Several specific naval skills are modifiers based on a character's Intelligence and are determined by consulting the relevant table. These are Gunnery, Ship Quality (known as Sailing Ability on the character sheet), and General Seamanship. The number of additional languages a character may start with is also based on Intelligence and ranges from 0 to 3.

Other facets of the character are determined by making percentile rolls on various tables including Handedness; Social Level (of one's father); Legitimacy; Position (in the family); various aspects of one's father's health, past service, and past rank; Allowance (yearly); and Patrimony.

SMUGGLER: The character will know very basic seamanship, and will also have intimate knowledge of 1D4 'smuggler's havens' on a friendly coastline, plus 1D4 smuggler's havens on the enemy coast. Will know the smugglers' underground in his own and the enemy's country, and will be able to gain intelligence from it. On a roll of 81-100 the smuggler has also become known to the authorities, who will be watching for him.

MERCHANT CAPTAIN: Will know basic seamanship plus navigation, stowage, and so on. Roll twice to see if the character can improve his Sailing Quality and General Seamanship scores (see Intelligence Scores for midshipmen, above). Will also have an intimate knowledge of commercial circles in his own and other countries. Due to his knowledge of trade routes, he may add 1 to his die roll on the Encounter Chart.

If I were to play this character in an actual game, I would provide the details of his birthplace, his path to a life of smuggling and privateering, and his interests and motivations, but that would require more research and time than I can afford at the moment. The character has potential, though, and I think I would enjoy portraying him.

You might say Privateers and Gentlemen is to the Horatio Hornblower novels what Flashing Blades is to The Three Musketeers, and that's not a bad thing.

Posted by Gordon Cooper at 4:11 PM

Email ThisBlogThis!Share to TwitterShare to FacebookShare to Pinterest
Labels: character creation, How to Create a Swashbuckler, Privateers and Gentlemen, role-playing games, swashbuckling