How to Create a Swashbuckler in Zorro: The Roleplaying Game 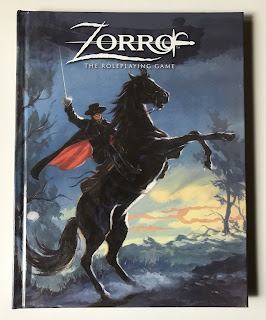 Zorro: The Roleplaying Game, published by Gallant Knight Games in 2020, "gives you all the tools and information you need to experience the swashbuckling, dramatic, and cinematic action of the legends and stories of Zorro!"

The burb on the back cover continues;

Players will be able to work alongside Zorro as part of Zorro's Legion, or even take on the role of the legendary hero! The book is rife with details about Zorro's adventures in Alta California, as well as providing rules to emulate the legendary actions of this masked hero of the people.

Featuring two full adventures, a solo adventure, numerous adventure seeds, 15 templates for characters, character creation, and a full bestiary of foes and animals, this high-paced game is powered by the newest edition of the D6 System from legendary publisher West End Games!

Zorro: The Roleplaying Game offers two ways to create a player character: templates and full customization. In the first method, the player selects a template complete with attributes, equipment, background, and personality. The player provides the character's name and description and distributes 7D (seven six-sided dice) amongst the character's skills. Templates include:

Both methods are equally valid, but for the purpose of this article I shall choose full customization.

Background: Gustavo Lobo is the son of a don and doña. He was educated in Spain where he acquired a love of literature, philosophy, and duelling. Upon his return to the New World, he embarked on a journey across Mexico where he learned the language and some of the surviving literature of the Aztecs. Equally motivated by art and justice, he has devoted himself to fighting oppression, preserving culture, and inspiring others.

Appearance: He is a man in his twenties with lively eyes and dark hair (already tinged with gray) that tends to flare out at the sides like a flame. He is of medium build and average height with broad shoulders.


Zorro: The Roleplaying Game has an intuitive, streamlined approach to character creation and an action resolution system to match. The skill system is focused on the likely activities of swashbuckling heroes and their enemies, which prevents the rules from being ungainly. I think it's a well-executed refinement of the D6 System, and I hope they use it to good advantage in adapting other swashbuckling genres. I can't wait to run this game.

Posted by Gordon Cooper at 7:27 PM